When I think XOXO, the first thought that immediately follows is Gossip Girl. Yup, you got me, I used to watch the show. My second thought is the more traditional, hugs and kisses. Probably what your first instinct was, huh?

Well, did you know that thinking hugs and kisses isn’t technically right? Apparently, the X is supposed to stand for kisses and the O is supposed to stand for hugs. So, really, we should be saying kisses and hugs. Can I tell you how I know this? I spent a good twenty minutes researching the meaning of XOXO. I had never really thought about why it represented hugs and kisses—yes, I will continue to say it this way, because I think it sounds better…feel free to join me—until I started making these cookies. And, once I thought about it, I really wanted to know the answer. So, here we go. Your very own lesson on the History of XOXO—now you can’t say I never gave you anything for Valentine’s Day.

Back in the Middle Ages, many people couldn’t read or write, and when they were presented with a document requiring a signature of understanding, they would simply write the letter X on the signature line. The X was meant to represent the cross and convey that in Christ’s name the contents of the document were true. But, wait, that has nothing to do with kisses! You’re right, it doesn’t. The kissing part of the story has been debated, but the common theory is that many individuals after signing the X would then kiss the X as a symbol of truly believing in what the document stood for. Sounds legitimate, right? Some people don’t think so. They choose to believe that the X simply looks like two triangle-faced individuals locking lips. Hence, X meaning kisses.

The O, on the other hand, has a history that is still very much debated. Some will argue that it was created by Jewish immigrants, who wanted their own way of signing documents that wasn’t related to the Christian X. Others say that the game of tic-tac-toe provided the inspiration for using the letter O when people decided they wanted another letter to represent a different kind of affection. Or, it could just be that an O looks like two open arms hugging.

What do you think?

Anyways, let’s talk about chocolate X’s and O’s covered in toasted coconut shreds on top of a buttery, coconuty shortbread cookie. Excuse me, as I go eat one right now.

The base of these little loveable bad boys is shortbread. A really reallyyy good shortbread. Before decorating them with X’s and O’s, my Dad taste tested a cookie and asked me if I had really made them. When I said yes—worried, mind you, that I somehow messed up the recipe—he said that they tasted like something you would buy at a bakery. Let me just tell you something about my Dad. He’s not a sugar-coater, if he likes something he’ll tell you, and if he doesn’t, you’ll know too. So, as you can tell, his compliment meant a lot to me. I found the recipe for this shortbread in a little wooden recipe box that used to be my Grandma’s. I don’t know where she got it or if it came from a recipe book, but what I do know is that I will never use another shortbread recipe again. And, since I like you so much, I’m gonna share it!

I wanted a little something more than just shortbread for Valentine’s Day, so I decided to spruce the dough up with coconut. Can I just say, it was the BEST decision ever. The shortbread cookie itself has that buttery, soft, melt in your mouth taste. The addition of coconut from both the extract, which isn’t overpowering, and the toasted coconut shreds, which adds a little crunch to each bite, leaves you with a subtly infused coconut cookie that isn’t overly sweet. I didn’t stop there though. The cookie is then decorated with semi-sweet chocolate and covered with more toasted coconut shreds in the form of X’s and O’s. Again, BEST decision ever. 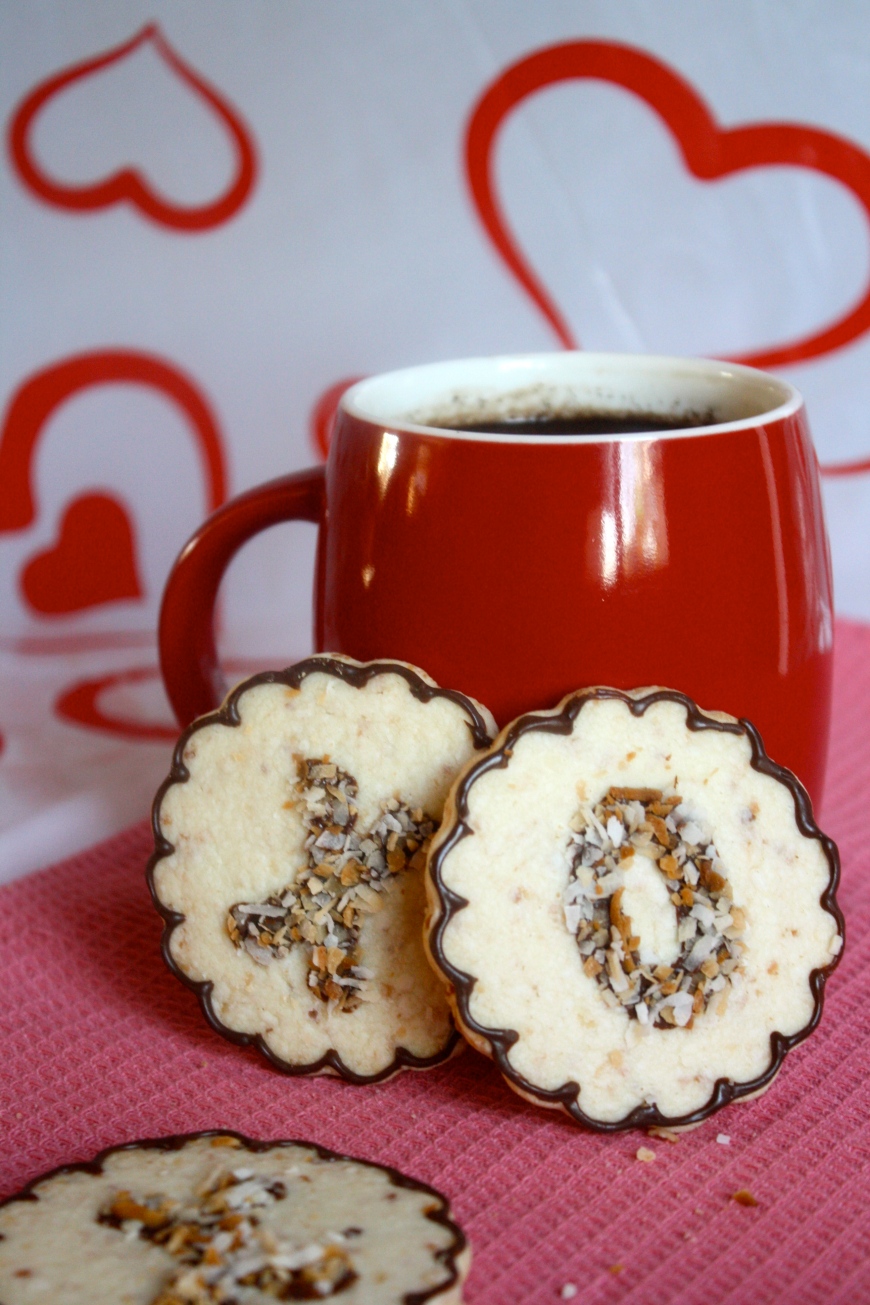 Believe me when I say that you can’t go wrong with these cookies. Seriously. Make them for your Valentine, a friend, your family, or for that special someone who doesn’t know that you like them yet. These cookies should definitely win that person over. Oh, and Happy [Early] Valentine’s Day. May it be filled with lots of X’s and O’s.

Directions:
Toasted Coconut Shortbread Cookies
Using a food processor (or, blender), pulse the toasted shredded coconut until coarsely ground. Set aside.
In the bowl of a stand mixer with paddle attachment, cream butter until light and fluffy.
Beat in powdered sugar until creamy. Scrape down the sides of the bowl as needed.
Add salt, cornstarch, and coconut extract. Mix until incorporated.
Gradually beat in the flour until combined, and then mix in the toasted coconut.
Gather the dough as best you can into a ball and place on a piece of parchment paper. Cover the top of the dough with another piece of parchment paper and roll to ½ inch thick. Slide the parchment-covered dough onto a cutting board and place in the fridge. Let chill for about 30 minutes.
After the dough is finished chilling, preheat oven to 350 degrees. Using the scalloped cookie cutter cut cookies—if the dough becomes too sticky or tough to work with place back in the fridge until it’s easier to handle.
Bake for 6 minutes, reverse tray (this will ensure an even color on the cookies!), and bake for another 5 more minutes or until lightly brown.
Let cookies cool for about a minute on the cookie sheet, and then transfer to a cooling rack to finish cooling.

Toasted Coconut & Chocolate Topping
While the cookies are cooling, coarsely ground (with a food processor or blender) the lightly toasted shredded coconut. Set aside.
Once the cookies have cooled completely, melt semi-sweet chocolate chips and a little vegetable shortening in a microwave safe bowl (microwave in 15 second intervals, stirring after each interval, until smooth).
Lightly press the X or O cookie cutter into the bowl of melted chocolate—make sure the cookie cutter has enough chocolate on the rim so that the outline will show up on the cookies. Use a toothpick to add or take away chocolate as needed. Gently press the X or O chocolate covered cookie cutter into the middle of the cookie and then lift up, there should be an outline of the letter—if the outline is incomplete, dip a toothpick in the melted chocolate and complete the outline by hand.
Working quickly, use either a piping bag or toothpick to fill in the letter completely with melted chocolate (I found the toothpick method to be easiest…just pretend the toothpick is like a painting brush)—if the chocolate begins to harden, place back in the microwave for another 15 seconds or until of drizzling consistency.
Once the letter is filled in with chocolate, sprinkle the toasted coconut over the letter. Dust off the extra coconut. If needed use a toothpick to add more coconut to a specific spot or to help keep the shape of the letter intact.
Using a piping bag with a small tip (or Ziploc), trace the scalloped edge of the cookie with chocolate. Re-melt the chocolate as needed.
Repeat the above steps, alternating between the X and O cookie cutter, until all the cookies are finished.