I’m embarrassed. Actually, maybe that’s not the right word to describe it.

I don’t know if you saw my Super Bowl Sunday post (it was a last-minute, 2 hours before kick off, mainly just pictures kind of post), but these delicious little bites were in the post. Well, not exactly these bites, cause I made more. Like the next day. The other ones were devoured.

I guess what I’m trying to say is that I’m a recipe repeater.

Can we all agree that’s perfectly acceptable? If you say no, I’ll just have to force feed you these bites until it is. Yeah, I know, I’m just the nicest.

I also liked the toothpick idea so much that I had to copy that too. Sorry I’m not sorry for that one. There is one difference though, I didn’t make these toothpicks. I bought them.You know what that means right?

More time to pop these into my mouth.

Let me just tell you, these little bites are ADDICTING. And yes, all caps and bold letters are necessary. Seriously, though, they’re like Oreos or popcorn or chips, you can’t just eat one.

I dare you to try. No, really, I triple dog dare you.

Anddd, I’ve reverted back to my five year old self with that comment.

Yeah, that was a lie. Just last week I triple dog dared someone to sing Taylor Swift songs over the loud-speaker. She didn’t do it. I, for one, was disappointed.

You know what hasn’t disappointed me? These Caramel Blondie Bites. Cause, seriously, they are little squares of utter heaven. I repeat, heaven.

This is the kind of dessert that literally melts away all will power. I’m not kidding here. You start off thinking, “I’ll just have one”, but after your sixth bite is done, the only thoughts in your head are: “How can I hoard these?”, “Why is that guy over there eating yet another bite?”, “I need another one, right now!”…those may or may not be direct thoughts of the people who ate these bites.

Don’t say I didn’t warn you.

Why all the fuss over these little guys? Simple. They are gooey, fudgy, buttery, brown-sugary, caramel blondies. Each bite has a crisp exterior, ridiculously gooey moist center, and a sort of caramelized caramel bottom layer—the caramel bits decided to huddle at the bottom of the blondie while baking, but I didn’t mind in the slightest.

I highly doubt you’ll mind either.

Directions:
Preheat oven to 350 degrees, and prepare a 9×13-inch pan by lining it with foil and spraying generously with cooking spray. Set aside.
In a medium-size bowl, whisk together melted butter and brown sugar, until no clumps of brown sugar remain.Add eggs, one at a time, and then whisk in vanilla. Whisk in flour and salt, until just combined—try not to over stir the batter or it will become tough to work with.Using a spatula, fold in the caramel bits.
Pour batter into prepared pan and smooth top, if needed, lightly with a spatula. Bake for about 35-40 minutes or until a toothpick, stuck in the middle, comes out clean.Let cool completely before slicing into bites.

I bet you can guess why. If not, just look at the pictures that follow. I’m pretty sure that will clear it up.

Cleared up for you? You see I’m kind of sort of totally into football (who knew, right?). And, I rather enjoy being apart of the 12th man. One could say that picture above is the epitome of 12th-manning it. I mean, my Hustle Like Russell Shirt, that glitter blue polish, the large Seahawks helmet ring, and lets not forget the star of the picture, that cupcake.

My oh my what a good-looking cupcake. Blue and Green never looked better on something.

I give you Super Bowl Sunday Chocolate Cupcakes with Blue and Green Swirl Vanilla Frosting and Football Sprinkles. Could it get any better than that?

Why yes, yes it can, with these Shortbread Chocolate Dipped Football Cookies.

That right there is the bomb.com

But, don’t worry, it gets better. Much MUCH better.

What are those you ask? Caramel Blondies with Seahawk flag toothpicks (courtesy of Emerald City Sisters Design). I’m dying at how yummy they are (no, seriously) and at how stickin adorbs these toothpicks are. I mean come on, tell me you don’t just love them. 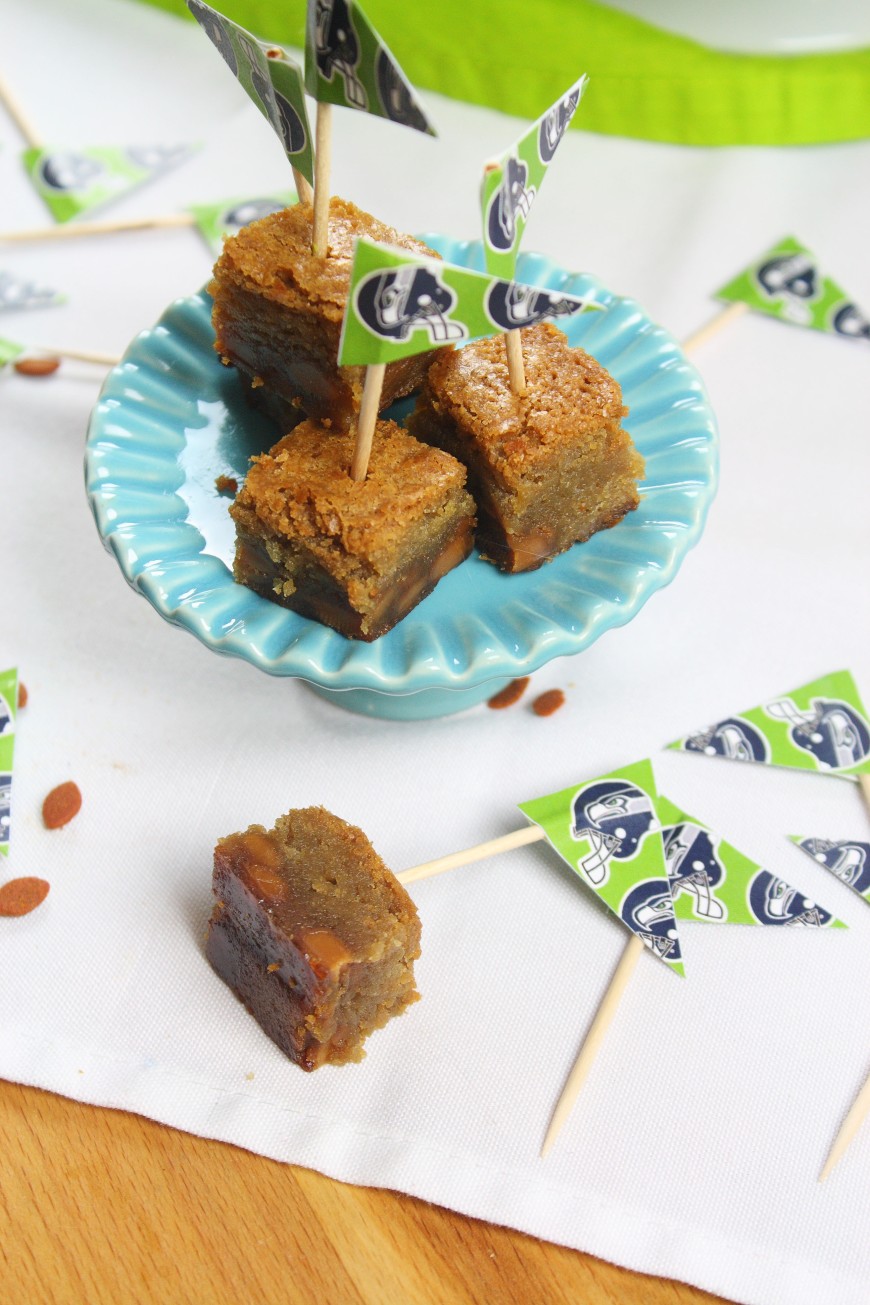 I’ll stop now. I just couldn’t let the day go by without you seeing the dessert spread I put out for the game. I mean, I maybe value your opinion. No big deal or anything. 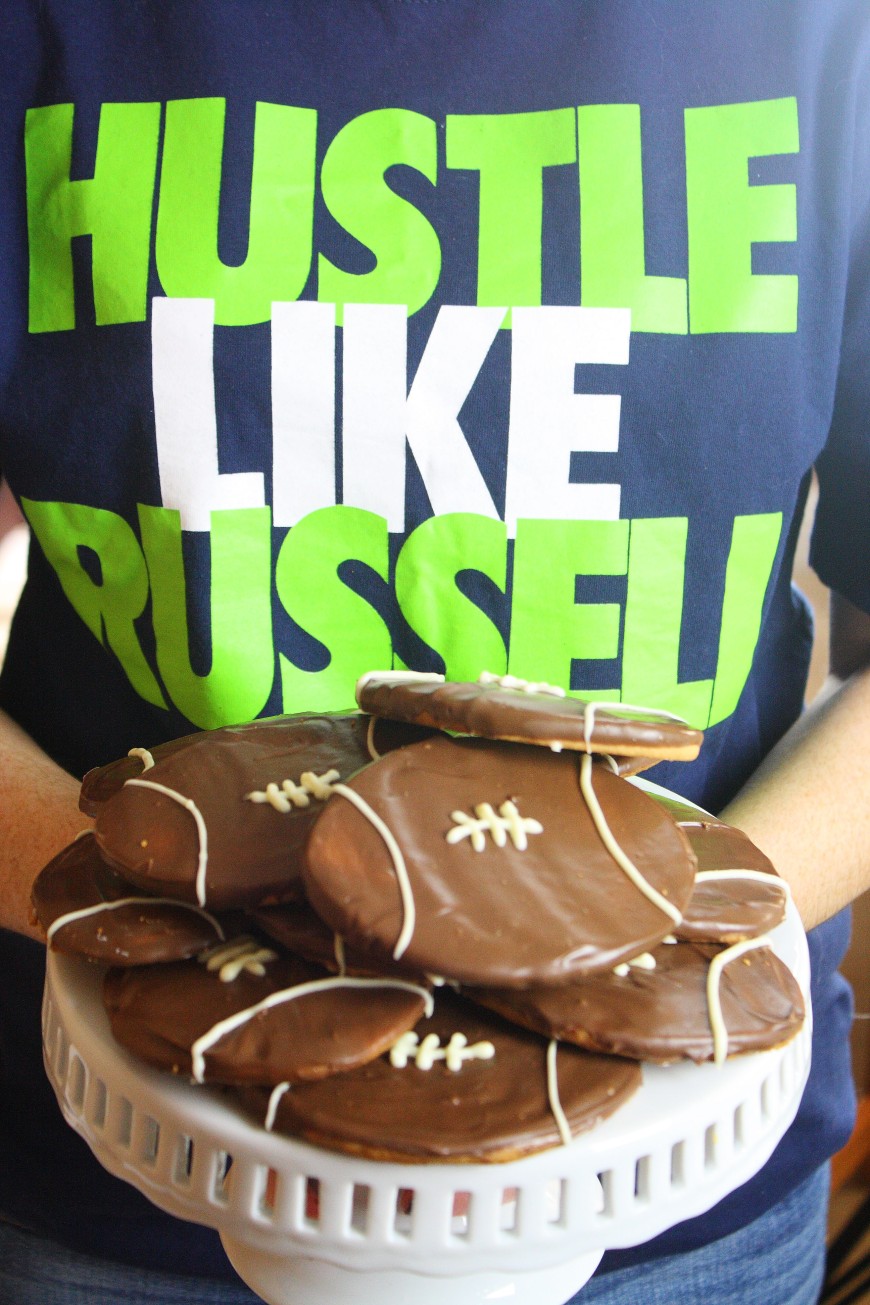 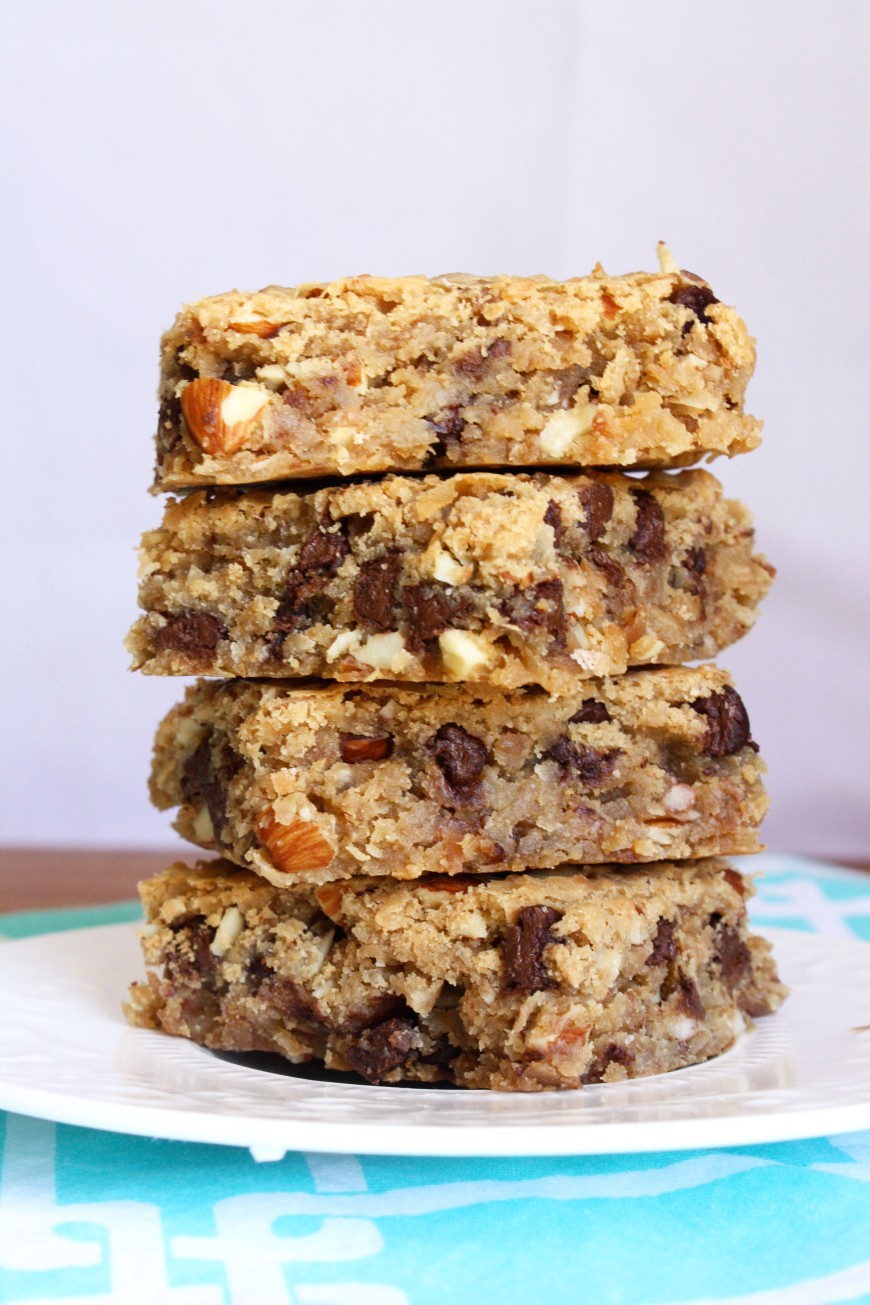 If you were to ask me what my favorite candy is, I honestly don’t know what I would say. I almost think I would answer that question differently depending on my mood, the month, or whatever was closest to me… and by that last one I mean, whichever candy was stashed in my purse. Yes, I am that lady that carries candy in her purse. Just in case. You never know when you just won’t be yourself.

Please tell me you picked up that Snickers reference? If you did, ignore this sentence completely, but if you didn’t, go watch a Snickers commercial. It’s kind of funny. And, very true.

I’ve had affairs with Snickers, Twix, Reese’s, and Gummy Bears throughout my life. I seem to always come back to one of these four. I can count on them. They never let me down. Ever. Which is why I have never really been tempted to grab a different candy bar in the aisle.

Until one day an Almond Joy walked up. Well, really, my mom bought an Almond Joy and I tried a bite, and lets just say it was actually pretty darn good. I really liked the combination of coconut, almond, and chocolate. A lot. But, I’m far to loyal (or too in love with) my other four favorites, that there is simply no way Almond Joy’s could become part of my candy routine. But, that doesn’t mean they can’t become part of my baking routine. Or, at least that the ingredients can’t. I’m a problem solver people. I know how to make things work in our (fine, my) favor. 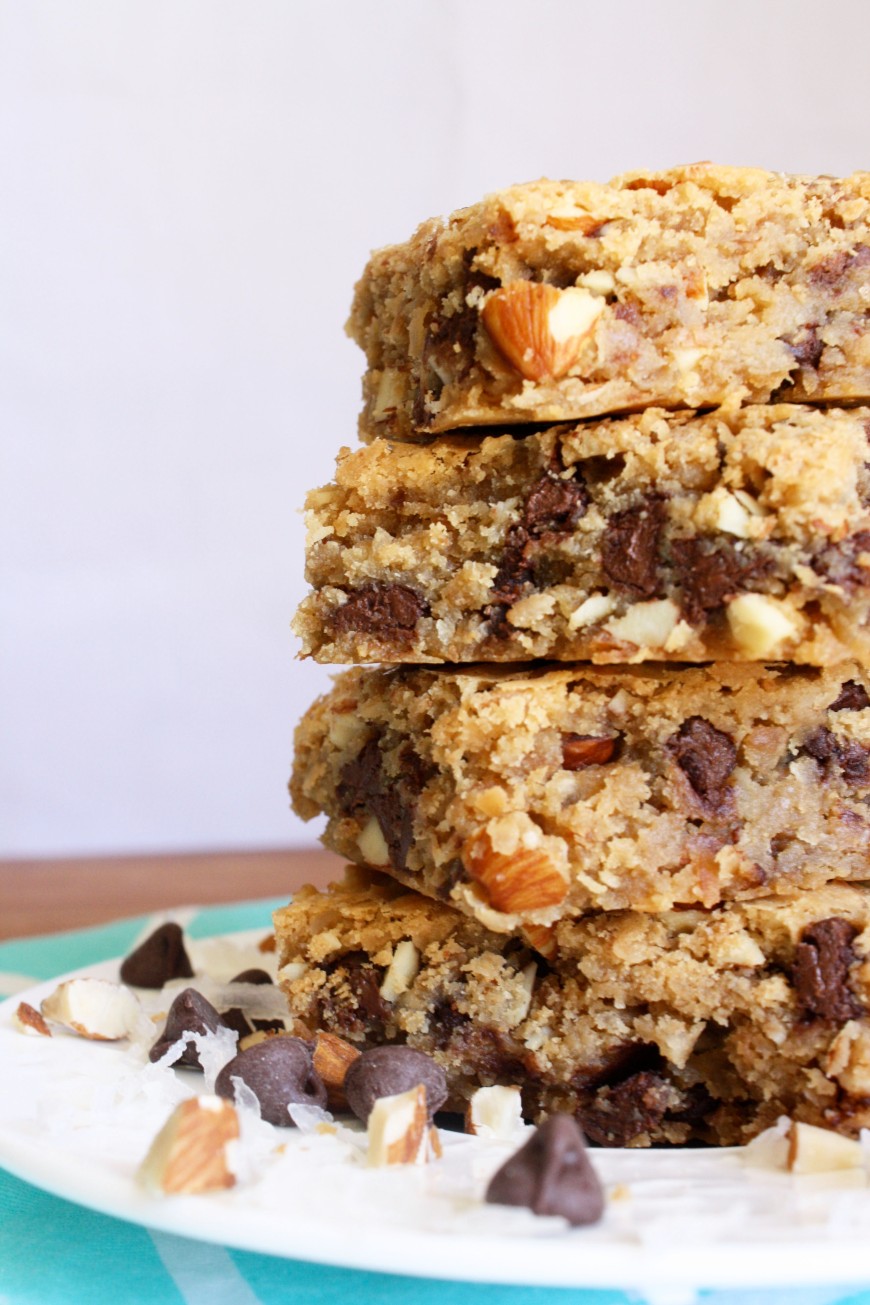 Oh hey there, Coconut Almond Chocolate Blondies or, more simply put, Almond Joy Blondies—I don’t know which name to pick, mainly because I don’t want you to think these bars have Almond Joy’s in them. They have all the ingredients of an Almond Joy, but no physical Almond Joy candy was present during the making process. So, I’m going to let you officially pick the name of these bars. Keep in mind, that this is kind of a big honor. I must really like you.

Can we take a brief minute to talk about blondies. Okay, so blondies. Yeah, I didn’t really get what all the fuss was about. I’m a brownie girl. I like my bars fudgy, gooey, and filled to the max with chocolate flavor. Blondies weren’t even a thought to me for the simple reason that they didn’t have fudge in them. They were acting like brownie imposters. And no one likes imposters. No one.

I now see the error in my ways. Blondies aren’t trying to be brownies. In fact, they have their own amazingly delicious thing going on, that they don’t even need to think about being someone else. Blondies are gooey and soft, taste buttery and rich, and are the perfect base for mixing in other ingredients. Why are they the perfect base you ask? Mainly because blondies allow all mixed in flavors, including its buttery self, to come through in each bite. They don’t overpower other ingredients and they definitely don’t let other ingredients overpower them. That’s why these bars are so good. Each bite is a combination of toasted coconut, some crunch from the almond pieces, rich chocolate creaminess, and a buttery gooeyness that keeps you coming back for more.

So, no, it’s not an Almond Joy candy, but I think I’ll dare to say, it’s better. Much better. As in, if this became a candy bar you could buy, I would gladly add it to my candy bar routine. In fact, it might work its way up to be my favorite candy affair.

Directions:
Preheat oven to 350 degrees, and prepare a 9×13-inch pan by lining it with foil and spraying generously with cooking spray. Set aside.
In a medium-size bowl, whisk together melted butter and brown sugar, until no clumps of brown sugar remain.
Add eggs, one at a time, and then whisk in vanilla and coconut extract.
Whisk in flour and salt, until just combined—try not to over stir the batter or it will become tough to work with.
Using a spatula, fold in toasted coconut flakes and then the almonds. Fold in chocolate chips until just combined.
Pour batter into prepared pan and smooth top, if needed, lightly with a spatula. Bake for about 35-40 minutes or until a toothpick, stuck in the middle, comes out clean.
Let cool completely before slicing into bars. 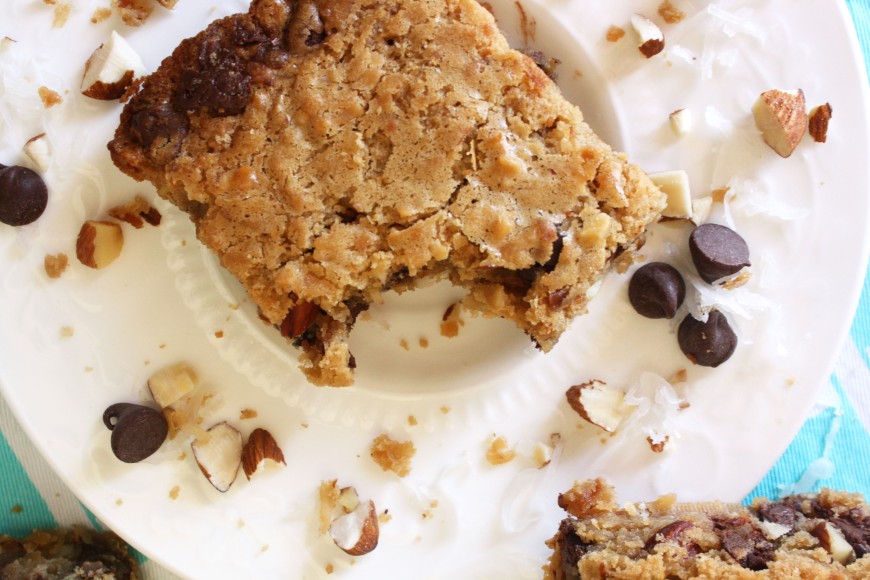